You are here: » Discovery and cruises at the heart of the Mekong delta » About » In our pages » The night of mid-autumn 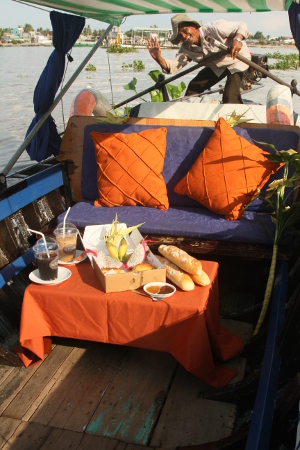 This morning, instead of bending twigs and gluing our fingers to make lanterns, big sister Thi showed me how to make lotus flowers made of paper. First we had to cut paper into squares. We folded fold and fold again. When we were done, it made like flowers, like little boats. Then Big Sister took me to find candles, and we came back with loads of tiny flat ones. We lit some just to see. I couldn't wait for tonight.

When night came, we went to the pier and found Bác Thống's skiff among the other boats. As soon as left the wharf, I was looking out the river. the full moon was already high above the water. I could see inside the boat by the light of the moon. Lulled by the rhythmic push of Bác Thống's oars, I started unpacking the flowers as Chị Thi was preparing the candles.

Chị and I sat low above the water. Bác Thống was standing in the rear, rowing with his crossed oars mounted up high above the board. Chị Thi was setting the candles all lit onto the flowers: the bow of the skiff was all glittery like a jewelry shop.

“You go first”, she said. I had been so mesmerized with the pitch black in front and the candles that for a moment I did not know what she meant.

I took my first flower and put it down right over the board onto the water. And let it slip. And it went, and I had a pinch at heart, letting go of such simple, fragile lit flower flickering on the big river, surrounded by the glitter from the moon on the waves. It was out of reach at once. As I was watching it, Chị Thi handed me another one with a chuckle: “Don't leave it alone there”.

Coming back to my senses, I picked the second one and left it to float after the first. Bác Thống was rowing backwards slowly to let them leave us. They were apart, all lonely. Soon we were sending others to keep them company. And they were already taking a life of their own. Away for an adventure on this immense world of water that is the Mekong. For a moment I was not sure we would be going back. 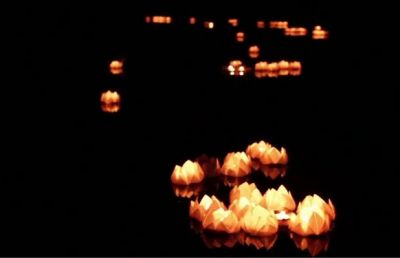 As we were getting to our last few flowers, we were overtaken by other floating candles coming from behind us, and I turned back, and, Whooaaaa!

The river was all covered in lit flowers, floating and casting their weak light back to the boats behind us. They were gathered upstream and were covered in kids and people and lights. They had been putting flowers on the river as well. Now we were surrounded by floating lights, undulating with the quiet waves of the river! What a scenery!

We let our last one go. Bác Thống turned the skiff around and we were then coming back, with the slow pulse of Bác Thống's oars. “Don't go too fast, Bác”. I could see he was sharing the wonder.

And for minutes that etched into my memory forever, we were on a river of gentle lights.

I knew it would be a big night.

By day, Bác Thống takes travelers to the floating market for breakfast.