You are here: » Discovery and cruises at the heart of the Mekong delta » About » In our pages » a steamer named Bassac

When the Messageries had to establish a line to Khôn, their current First Class Steamboats were not fast enough to run upstream in the high waters season, so here comes the unclassed river steamship Bassac, the first cabin cruiser to be able to run all the way up the Mekong to the North of Cambodia, and host passengers at night when needed. 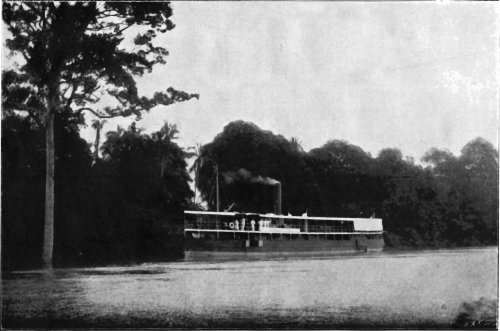 the first of the Bassac, at an anchor near a cây sao tree in a flood. Image © ANAI

The Bassac makes a class apart, able to run 12 kts (about 20km/h on still water), as fast or faster than the Second class (daytime) launches that were used along that route until then. She was employed from the early 1890s on between Châu Đốc, Phnom Penh and the Southern station on the island of Khôn, where she once hosted Governor General Paul Doumer. From July 1896 on, she ran the line with a new sister ship, the Vien Chan.1)

Her tall, straight bow and high free-board suggest the first Bassac could have been designed to reach Saigon through rạch nước mạn, which shows sea swell.

The Bassac was fitted with electrical ventilation only in 1914 and on a pointed order by the General Government of Indochina on the exclusive contract for postal service, which left little to interpretation by the Messageries2). 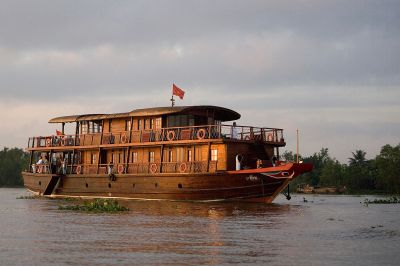 More than a hundred years later, the dimensions of the boats remain dictated by the rivers they trade, even with the additional constraint of crossing bridges that were not there at the time. Today's Bassac follow many choices made by the pioneers of the XIXth Century, in capacity, dimensions and speed, even though we did not know the XIXth Century Bassac when we designed and built ours.

Today as then, to be able to turn around and stop anywhere on these waterways, we still need to be less than 40 meters in length. The secondary canals and rivers, like Chợ Lách Canal, get very narrow in the low waters, and we may need to stop at a moment's notice if debris or a tree then, or a sand barge today, is in the way. And if we go along with the current, it means turning around and casting anchor.

Today's Bassac's air draft meets the same constraints as in the XIXth Century: in case of a strong wind, and a sudden gust may come in a moment in the monsoon season, we must be low enough on the water to ensure stability, and if necessary get some cover from the vegetation. As they do not have the large bulk of a steam engine, with its boiler and coke store, to weigh them down and stabilize them, our Bassac are wider than the historical steamer. 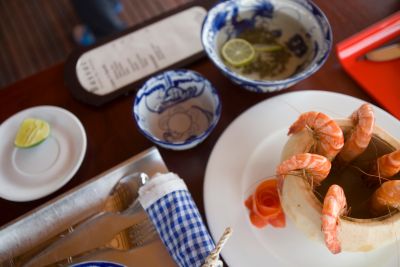 Some standards, we needed to update

“At Rueff's, the dining table and on-board hygiene remained to the end very inadequate and it was not until 1910 that, with the expiry of its contracts looming, the Company grudgingly consented to add 4 poor cabins […] and at last equip the steamers with such a pale electric light that the passengers had to give up any reading after dark.”3)

Fortunately, today's Bassac do not blindly follow all the standards set forth by our glorious forefathers. Today, no need for a candle on the half-deck, near the horses and poultry, to get to read at night.

Originally published as part of a XIXth Century Bassac, which holds a bibliography.