You are here: » Discovery and cruises at the heart of the Mekong delta » About » In our pages » the River Shipping Company of Cochinchina, story of a monopoly - 3/3

the River Shipping Company of Cochinchina, story of a monopoly - 3/3 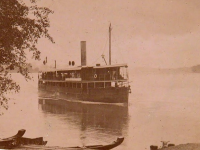 The adventure and passion for the river must have dwindled with the advent of the later contracts: in 1914, no question of a 20-years monopoly anymore, and the terms were tightened so much as to turn the Messageries essentially into an administration.1) Between the ebb and flow of the Mekong, the lack of diligence of the officers in charge and insufficient infrastructures, The Messageries, went on neglecting their duties until the outrage flared in the late 20s. 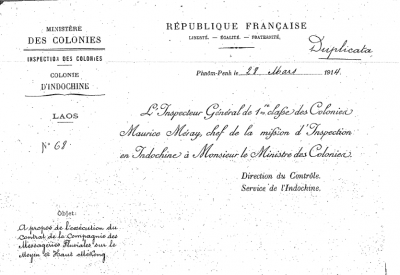 The beautiful report to the Minister that paved the way to the tightening of the Messageries's contract. It speaks of slack, of missed connections, and of lack of enthousiasm. There again we hear of the steamer named Bassac, trading in 1914 between Phnom Penh and Kratie. PDF, in French, (c) Kyoto University

Then the Compagnie Saïgonnaise de Navigation et de Transport (C.S.N.T.)2) and based in Saigon, the Messageries steeply increased the river transportation fares in 1926, once the contracts had been secured for a new period, thus opening wide the way for Siamese (Thai) competition, anchoring their bad name with the residents of Laos, and firing outrage in the metropole. 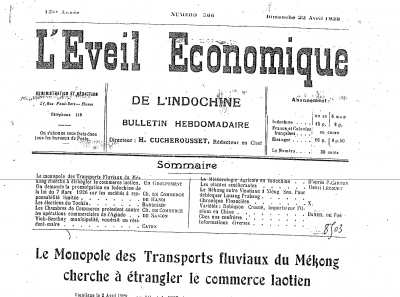 The indictment by the Laotian business society of the acts of the C.S.N.T in 1928, in Economic Awakening. “The river transport monopoly is trying to strangle Laotian trade” PDF, in French, (c) University of Kyoto

The business became essentially a conglomerate: the capital of the Messageries was invested into as diverse sectors as plantation and transformation of rubber, the Comptoirs Généraux de l'Indochine (general commercial venture, state-sponsored), public works and electricity, sawmills and the Crédit Foncier de l'Indochine, a bank.3)

The C.N.S.T. was eventually sold in 1938 to the Société de Chalandage et Remorquage de l’Indochine (River shipping and Tugging company of Indochina).

But… still to be continued with: A Steamer Named Bassac!