You are here: » Discovery and cruises at the heart of the Mekong delta » About » In our pages » The delta at stake 1/4 -- Autumn floods 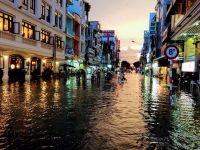 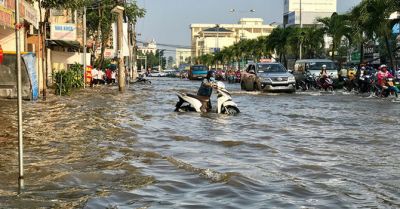 The October floods are foreseeable: right after the Autumn equinox, the tides out at sea are the highest in the year, and the Mekong is high too, carrying melted snow from the Himalayas and the rains in South East Asia. As the currents from the sea tides collide with the flow of the Mekong, the surge covers a large part of the Mekong delta. But the floods have been more and more extensive over the recent decades.

What makes the predicament of the Mekong delta change over time is about the climate, about the Mekong, and about the use people make of land and underground water in the delta itself.

In the cities, people have been eager to build higher above the ground, not only the floors of houses but also the streets and curbs, so as to retain the freedom to move when the water is high. This may be of some use against the high water in the river when the tides are too short for the river to really overflow, but then when it does, or simply when the monsoon rains come, there is little that can be done against the sheer volume of water involved. 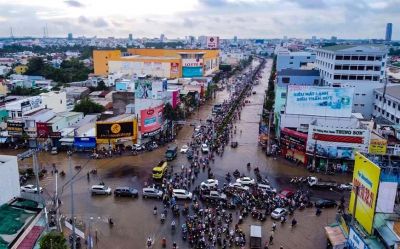 Worse, the paving of the roads and curbs in itself, useful as it is for sanitary reasons in drier times, prevents the water from filtering through the ground and escaping to the water banks.

The piped underground sewers play a role too: not only do they throttle the drainage of flood water, but they may also provide a passage for the river into the land across high ground and roads, and even dikes. Indeed, sewers will empty out in the streets, and black water will show in places –unsanitary, even though as most houses have septic tanks, the black water is less of a health risk than it could seem.

But then again there are floods in the countryside too,

and then there is erosion of the land and the banks,

and then there is a looming scarcity of fresh water in the delta.

The autumn floods would not mean much drama if they were not announcing a deeper evolution. Let's talk about exhausting the water banks, and let's talk about changes in quality in the Mekong's water. More about that soon.