You are here: » Discovery and cruises at the heart of the Mekong delta » About » In our pages » the River Shipping Company of Cochinchina, story of a monopoly - 2/3

the River Shipping Company of Cochinchina, story of a monopoly - 2/3

a time for adventure

The Messageries fluviales took a central part in the logistics of the 1893 expeditions upstream to Laos, with launches like the Hàm Luông, Lagrandière, or Massie, which allowed access up to Luang Prabang and even to the Golden Triangle and the Southernmost confines of China. But at that time, like today, the Khôn falls, at the 4000 islands, prevented steamers from crossing the Mekong upwards from Cambodia to Laos. In order to transport the first launches to the first bief upstream, the Messageries installed on the large Khôn island first a metric railway with three hand-powered carts, then a real railway when commercial traffic took up.

A time for adventure 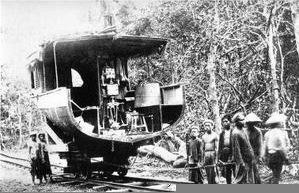 To take her upstream, the launch Hàm Luông, was truncated and set on rails on the South of Khôn island in October 1893, then hauled towards Laos on a man-powered cart. Branded a gunboat, she displaced only 20 tons. (Image © Souvenir Français de Chine)

There we find a steamer named Bassac, shuttling goods between the Southern end of the Khôn island, just South of Laos, and Cochinchina.

Like many de facto monopolies, the Messageries Fluviales had a mixed reputation of using and sometimes abusing their privileged position. Supplying the troops and colonization effort towards Tonkin was very lucrative, and it was probably to keep the upper hand on this market that the Messageries Fluviales supported and even financed in part the 1893 expeditions, meant to open commercial routes to Laos.

When they opened a line towards Battambang, which was de facto under the dominion of the kingdom of Siam (now Thailand) but was coveted by France, the Messageries ran along this way very irregularly. Traders who needed to ship goods through the Battambang would have to pay grossly inflated fares and even kickbacks, and it is said Jules Rueff would lend at the steep rate of 120% per annum1). When competitors tried to open trading routes on waterways Rueff judged his own, not only did they not get the subsidies, but the Messageries had their own contracts extended.2)3) 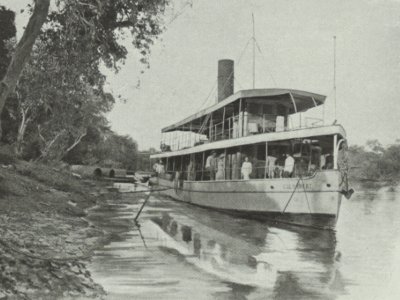 “In this business, which was entirely to the benefit of the Company, the Colony was to pay for the whole 25 years of the contract that committed it to Rueff, as a postal subsidy, considerable amounts of money, which allowed him to build within 15 years4) a colossal fortune. […] That did not prevent the management from being such misers as to make all the Scroodges on Earth pale in jealousy.”5))

The crew were ill-paid and made liable for any loss, but such was the moral standing that some had a reputation for good living, and a few even made a fortune, basking in riches, women and even racing horses, like a certain Commissioner P… on board the steamer Donaï6), who the tax officers chased all around Indochina and Siam for smuggling weapons and opium but never caught.7)

The Messageries Fluviales were nevertheless very present throughout the period, and took an active part in the expansion of the colony. Its boats were involved in both the logistics and the military operations, the cargo J-B Say was even sunk by the Siamese in 18938)) in the midst of such an operation.