Lost meanders of the Mekong delta

The Mekong is a long, quiet river. But here and there you can find marks of history kicking the landmarks and reshaping the rivers.

Who navigates the Măng Thít river will cross the Măng Thít bridge, which 80 years after it was first built is still “Cầu mới”, or “new bridge” as all bridges are called when they are first built –the name may endure: in Paris, the “Pont neuf” is 400 years old.

River Măng Thít drains a large part of Vĩnh Long province, with its maze of canals and arroyos. It also connects two of the main branches of the Mekong, river Cổ Chiên, which passes Vĩnh Long, and the Bassac, that is the Hậu Giang River, which bathes Cần Thơ. With the twice-daily cycle of tides and currents, river Măng Thít actually helps balance the water levels between the two rivers, and its current is often very strong, and barely predictable, with vortices that can trip the less experienced captains. That current keeps the river deep and wide.

Right on the Cổ Chiên side of the Cầu mới is a wide meander, traded daily by barges and boats. Rivers tend to dig out the outside and silt up the inside of a meander, which in the folks' voice translates into a saying about the comings and goings of life: “dòng sông bên lở bên bồi”, “rivers carve one bank, fill one bank”. Over the years, the meanders wind longer and expand until they make loops.

There is no such meander to the South-West of the bridge, but an early XXth century map shows one at least as long. On the map, a shortcut has been cut, probably just to shorten the journey by boat, at a time when boats in the region were mostly drawn by oxen and pushed with poles. This is today's path of river Măng Thít. Naturally, the current diverted to that shortcut, widening it and maintaining it deep enough for traffic to trade. 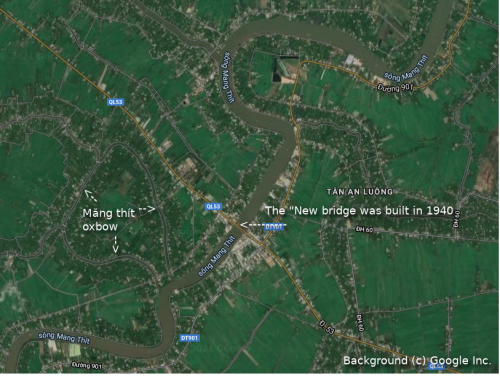 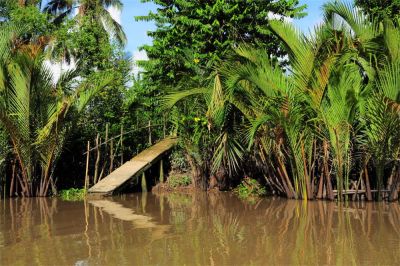 But what happened to that long branch? Did it disappear, swallowed by the bush and the vegetation as every thing ends here in the delta? Surely it was of some use to the local inhabitants, even as an oxbow? So we pulled Google Map's satellite pictures, and went exploring the dead meander of the Măng Thít river. It is now a small arroyo looping along its former glorious path, and it retains a very quiet ambiance, with little trade on its waters other than local skiffs and the now necessary dredges that maintain it.

This area is where the Bassac boats cast anchor for visits to the Măng Thít countryside. And this is one of the visits we arrange, depending on the current and the tide: we cast anchor outside on the main river Măng Thít, and a longboat takes you to shore in this poignant historical place. When time and Covid allows, come along to Măng Thít with us, and take a stroll from the embankment through the first tree line, to the rice fields right behind. Feel the quiet. Meet the people who live on this land and maintain this river. 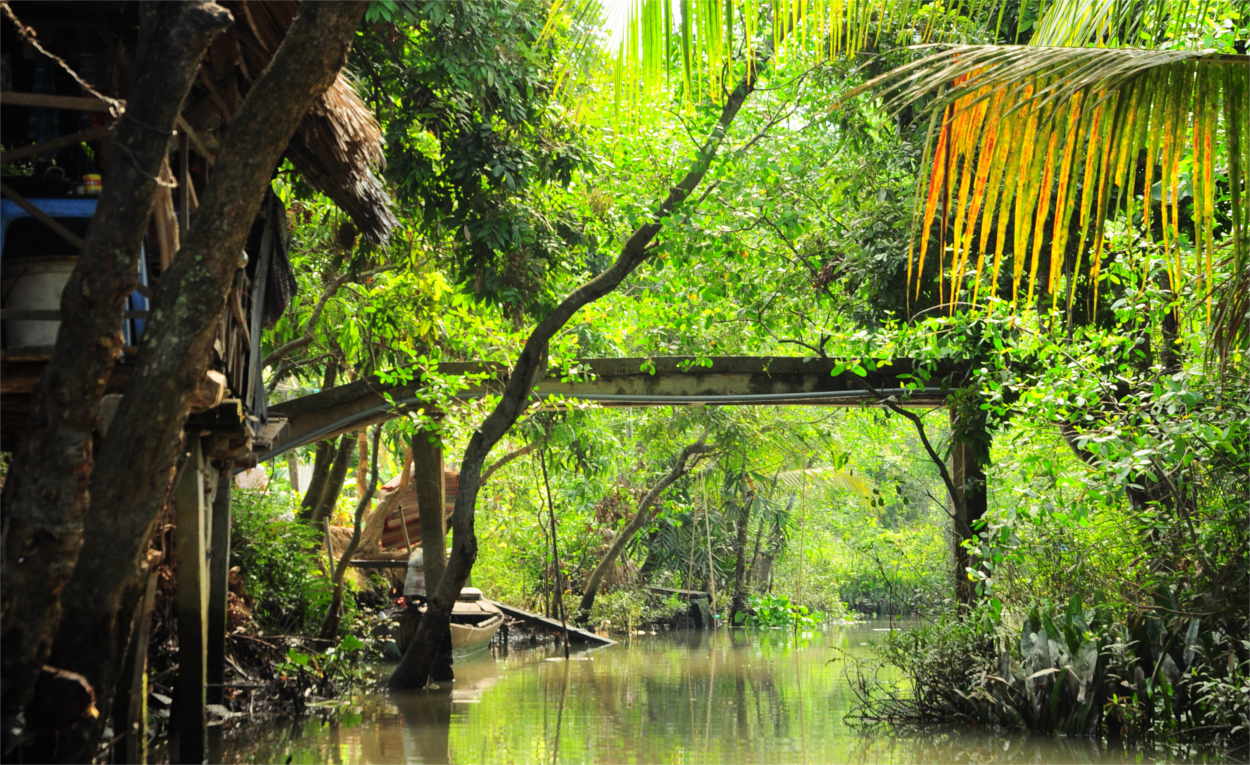